Starting from Centro Fondo Aisone, we descend the SP 337 for a few meters and then we take the road on the right that goes up to Pinet. When the slopes begin to accentuate, we turn left on a gravel road that crosses the chestnut groves until we cross the Valletta river and shortly afterwards we find ourselves on the road that leads first to Paluch and then to Signora. Then we take a gravel road on the left and then a path with a compact and easy terrain but with some small fords, some outcropping rocks that leads to Perdioni where we take the SP 337 that leads to Demonte. From here we go up the Vallone dell’Arma through some villages up to Fedio Chapel where we turn to reach Madonna del Pino (1030 meters above sea level) where we can enjoy a 360 degree panoramic view. A little further on, after a pylon, we take an old mule track with an irregular terrain that leads to Rifodon where we pass on a road that shortly after the chapel of S. Grato becomes gravel. After crossing the SS 21 with an underpass, we continue to the right on a mule track to S. Giuseppe where we take a road which, along the river, leads to Aisone. At the end of the town we start to climb crossing the SS21 to reach the Pirone with a steep climb alternating stretches of asphalt and other gravel roads. Leaving the village, we cross the valley halfway up a mule track, a technical descent near the Rio, until we reach Castellar delle Vigne. From here we quickly lose altitude on asphalt up to S. Defendente, we take the gravel road on the right, with a little rough surface, in the direction of Forte Neghino. After a few bends, take the path with an irregular terrain that goes down to Vinadio where we follow the bastion of Forte Albertino to the lake. From here, we take the gravel road first and then, crossing an iron bridge, the SP 337 road toward the village of Goletta where we go along the gravel road that runs alongside the river to return to Centro Fondo Aisone.

Along the route we can find red marks that reflect the symbols of the signpost, i.e. the triangle with two circles, which can help you find your way. 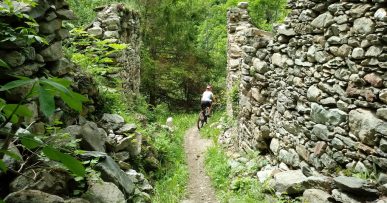 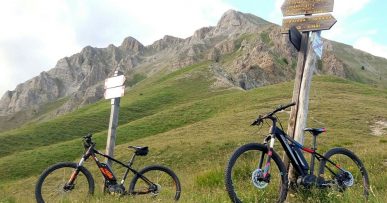 No liability is accepted for damages and\or accidents to people and\or things on the trails indicated on this site.

Check which trail is accessible at the moment!

This website uses cookies to improve your experience while you navigate through the website. Out of these, the cookies that are categorized as necessary are stored on your browser as they are essential for the working of basic functionalities of the website. We also use third-party cookies that help us analyze and understand how you use this website. These cookies will be stored in your browser only with your consent. You also have the option to opt-out of these cookies. But opting out of some of these cookies may affect your browsing experience.
Necessary Always Enabled
Necessary cookies are absolutely essential for the website to function properly. This category only includes cookies that ensures basic functionalities and security features of the website. These cookies do not store any personal information.
Non-necessary
Any cookies that may not be particularly necessary for the website to function and is used specifically to collect user personal data via analytics, ads, other embedded contents are termed as non-necessary cookies. It is mandatory to procure user consent prior to running these cookies on your website.
SAVE & ACCEPT